Today Nur is taking us to Turkey through her Sou Boureg recipe.  She was introduced to Sou Boureg at her favorite Armenian restaurants in Beirut, as well as charming breakfast spots in Istanbul. All her research has led her to realize that it is an Ottoman dish that made its rounds evengoing as far as Eastern Europe. It’s easy, and great served hot and cold!  Make sure to serve it on block printed Table Linens. 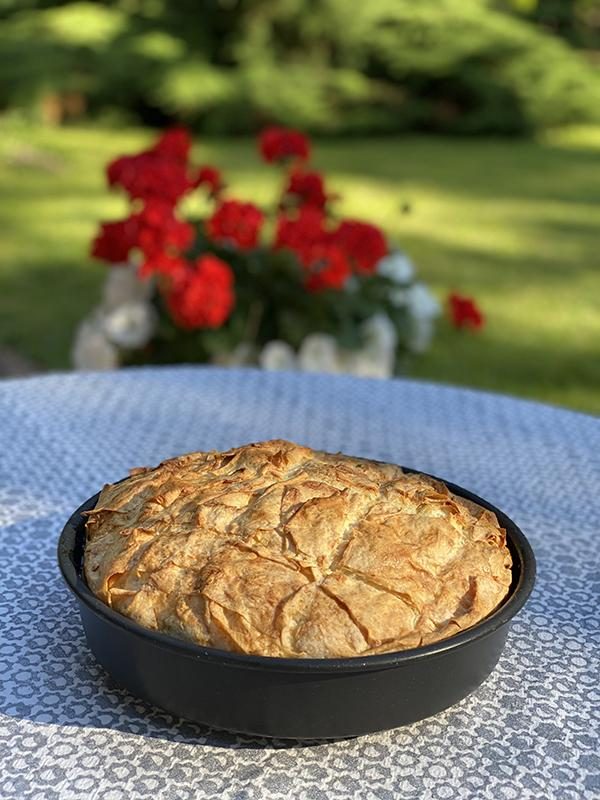 Put the 3 eggs in a large bowl, add a pinch of salt and begin to whisk. Once a kind of froth appears then add the cup of oil, continue to whisk until completely incorporated, then add the

milk and water and your dipping mixture are ready!

Take a round baking tray that has a good height and butter it generously. Take one full round phyllo and line the tray leaving the phyllo to overlap around the tray.  Then cup up the remaining phyllo sheets, they don’t have to be equal in size, dip them in the mixture of eggs and layer them on the tray. Once you reach half the quantity spread out your filling. Your filling can really be anything at all, but the traditional recipe is done with just crumbled white cheese, neutral in taste, and parsley. I love to add dry mint.

Once you have an even layer continue to fill with the rest of your phyllo. Finally, fold over the base phyllo (that is holding the dish together) on the top and pour in the remaining mixture. Caressing it so that the entire top layer is moist. Refrigerate for two hours. Once out of the refrigerator cut the pastry in a grid, then bake it in an oven which has been preheated to 200 degrees Celsius.  Make sure not to burn it, it’s sensitive!